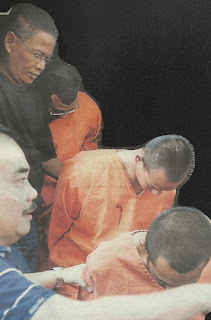 The nation was again shaken by a recent Hollywood like daring dash for freedom  made by 9 prisoners en route for trial in Butterworth.What more this  'great escape' once again dented the integrity of the Royal Malaysia Police. Fortunately or otherwise  two of the escapees who faced murder charges were obliterated from the list but the air of  doubts  surrounding the truth behind the entire episode remain.Although the long arms of the law did finally catch up with the other three escapees,however those  criminals still at large can resort to unimaginable violence if  circumstances are not conducive to them.

Not only does this put the police under the microscope but it also pushed  the prison authority into the limelight as well. Procedures were meticulously set in the form of standing orders connected with guard and escort duties and this gets frequent update.The system  does not fail but the personnel entailed for guard and escort duties do and in a case like this the pertinent cause can be no other than, non  compliance to the requirements in the order. The Inspector General Standing Orders (IGSO) on guard and escort duties not only clearly categorised and  defined prisoners,it also stipulate the required number of escorts needed for each category. Matters seemed to have been taken lightly with complacency being the culprit, despite the fact that two of the prisoners were  individuals charged with a serious crime of  murder that carries the death sentence upon conviction.Hilarious too, the number of prisoners in this incident surprisingly outnumbered their escorts.Answers are needed for the following questions.
This  'great escape'  can be a script worthy of a movie and investigators need to seriously seek the truth and nothing less.Accountability is another serious matter.Who are the ones really responsible? Obviously in this unfortunate incident the finger will be quick to zero in to the police escorts, non other than the rank and file.The other side to this is the  lack of supervision on the part of the officers in charge of such assignment is not a trivial issue.

As a matter of fact the Minister of Home Affairs is  in a way also  accountable. Certain police duties and operations needed the necessary tools to execute and when these are lacking an officer's initiative is usually drawn into play and this can at times bring disastrous consequences. The lack of logistics seems to be a never ending problem within the Police Force. Insufficient gazetted handcuffs though is a small part of the problem but apparently is something hard to resolve.Look into the reason why a vehicle not meant for escort duty was utilised in the first place? What obvious answer can it be? The non availability of a suitable vehicle has always been the common excuse from the 'manual of excuses'. Police budget cut is the other reason usually heard and can the Police  be blamed for performing under constrain?
The government must now seriously ponder on the possibility to construct remand lockups next to future courthouses to reduce the problem of commuting prisoners from police lockups to the court. The 'Black Maria' is the main feature in guard and escort duties. In those days in KL it was this mobile lock up that made the daily trips ferrying prisoners from Pudu jail to the court house and back having to endeavour the horrible KL jam.Now it is from Sg Buloh located some distance away to the Jalan Duta courts.The journey to this destination often present a stress on those involved as anything can happen along the way.Hopefully those involved in this duty are physically and mentally prepared for any eventualities. A criminal courthouse constructed on the vacant field adjacent to the iconic Pudu Jail would have  eliminate all risks of prisoner escape or attempts to free them. But sadly, instead, a shopping complex will eventually step into this location while memories of the iconic Pudu Jail that served the justice system so well will just fade into oblivion.

Lockup duties are shunned by most rank and file. While a good and reliable electronic surveillance system can undoubtedly reduce some burden related to guard and escort however, whatever technology put in place will be meaningless if the personnel lacked urgency.Incident like this 'great escape' can be prevented with strict compliance to rules and regulation, strict supervision and placing a high sense of responsibility on the job entailed to them without letting complacency get the better of oneself. I only wish the best for the Royal Malaysia Police and that the government of the day have a moral duty to ensure that the Royal Malaysia Police is equipped with the best  tools available to create fear among the criminals and at the same time boost public moral on public order and security, peace and tranquality.
Posted by OBEE at 1:13 pm No comments:

OBEE
I don't cause wrongful loss to others and wrongful gain to me and I don't destroy the environment but to preserve nature. Do some good deeds along the way to the final destination. Time is running short!